With the original recipe
Spaghetti alla Carbonara: The role played by American GIs in the invention of the pasta classic

Noodles, eggs, bacon and cheese – these are all carbonara needs. But who really invented this dish: Italians or maybe Americans? We started looking for signs.

“Spaghetti alla Carbonara” is like the Pope of the Vatican of Italy. Or? To this day, it is not really clear who actually invented the pasta classic. There are many stories, but few hold water – and not just one story line leads to the US.

Carbonara, many reluctantly go to Rome. But even in Naples, people cross their fingers when it comes to the origin of the recipe. What is certain is that carbonara, as it is served today, is a very young dish. It was first published in 1955 in a three-ingredient version – eggs, pancetta, cheese. The noodle dish was pre-cooked, or at least varieties of it.

According to the Neapolitan theory, carbonara could be a descendant of the dish “Il cuoco galante”. Behind this, if you will, is a slimmed-down version of carbonara that dates back to 1773 and consists mainly of pasta with egg. This is the recipe for “Cacio e Uova”, which was written down in a cookbook six decades later. But the third cookbook author in the group came closest to today’s Carbonara: Francesco Palma. They say he added rice and cheese to the dish. But one little essential, apart from the name, was still missing from Palma: Pancetta.

Spargonara: How to make carbonara with asparagus

Only in the post-war period did the fog around Carbonara clear a little more. In the 1950s, it was first mentioned by name in the Turin newspaper “La Stampa”. In an underground verse. There is talk of American soldiers who are said to have regularly dined in Rome in earlier years. But maybe that’s not all. Because there’s also a theory that GIs stationed in Rome took their daily rations of eggs and bacon to Italian kitchens—and thus contributed to the invention of carbonara. At least that’s what Marco Guarnaschelli Gotti believes, who wrote it in the “Grande encyclopedia della gastronomia”.

The story of chef Renato Gualandi also spreads in this way. He is said to have been hired by the British and Americans in September 1944 to cook for them at the first official meeting in Riccione, in the newly liberated province of Rimini. “The Americans had fantastic bacon, nice heavy cream, cheese and powdered egg yolks. I mixed it all together and served this pasta to the generals and officers for dinner. At the last minute I decided to add some black pepper. , which yielded a superior pepper. taste”, Gualandi is said to have announced according to the Italian website “Gambo Rosso”. Soon after, the chef went to Rome, where he cooked for the Allies and, some believe, the food spread more and more.

Not everyone likes the fact that Americans somehow contributed to the development of the Italian bestseller. Especially since it could have been the Italian coal stoves that cooked the dish first. Some food encyclopedias claim that this dish was actually already known in the Latium region before the Americans settled there. According to this, it is said that it was prepared by the cabbage-burners (Carbonaro) during the lunch break. And finally, the name of the dish, spaghetti alla carbonara suggests this. It means as much as Kohler’s spaghetti. Others point to woodworkers in Abruzzo, who are said to have cooked simple food over a charcoal fire.

These are the best pasta recipes in the world 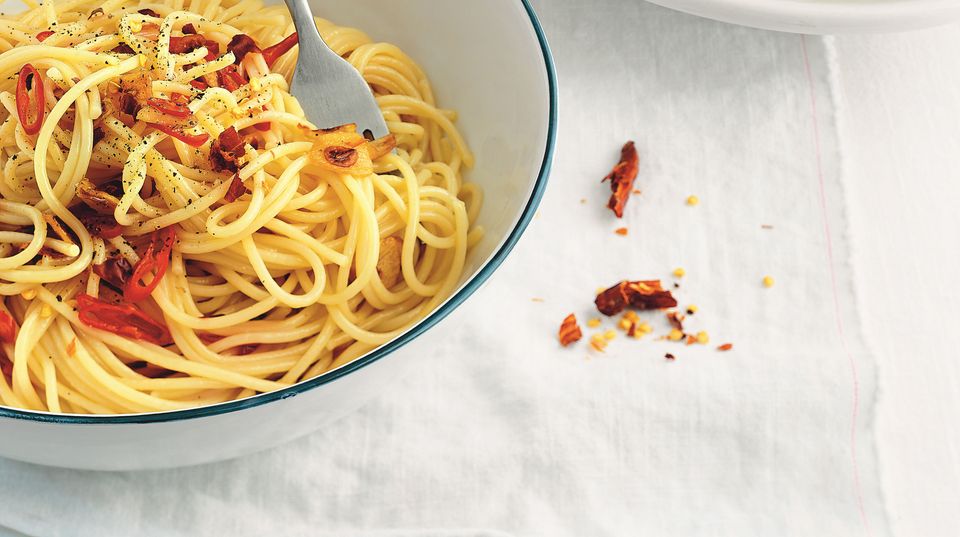 Pasta aglio e olio is a simple and very old pasta dish from southern and central Italy. Here is the recipe!

Although this classic pasta recipe comes from Carlos Santi and Rosino Brera’s 1966 cookbook, which is pretty late, many call it the original recipe. What is certain is that it is a style that has become widespread today.

Fry the cubed guanciale in the oil until smooth. Boil the spaghetti in plenty of salted water until al dente, put in a bowl and mix with the butter and bacon. Divide the batter into four deep plates and place an egg yolk in the middle of each. Mix well and sprinkle with grated parmesan.